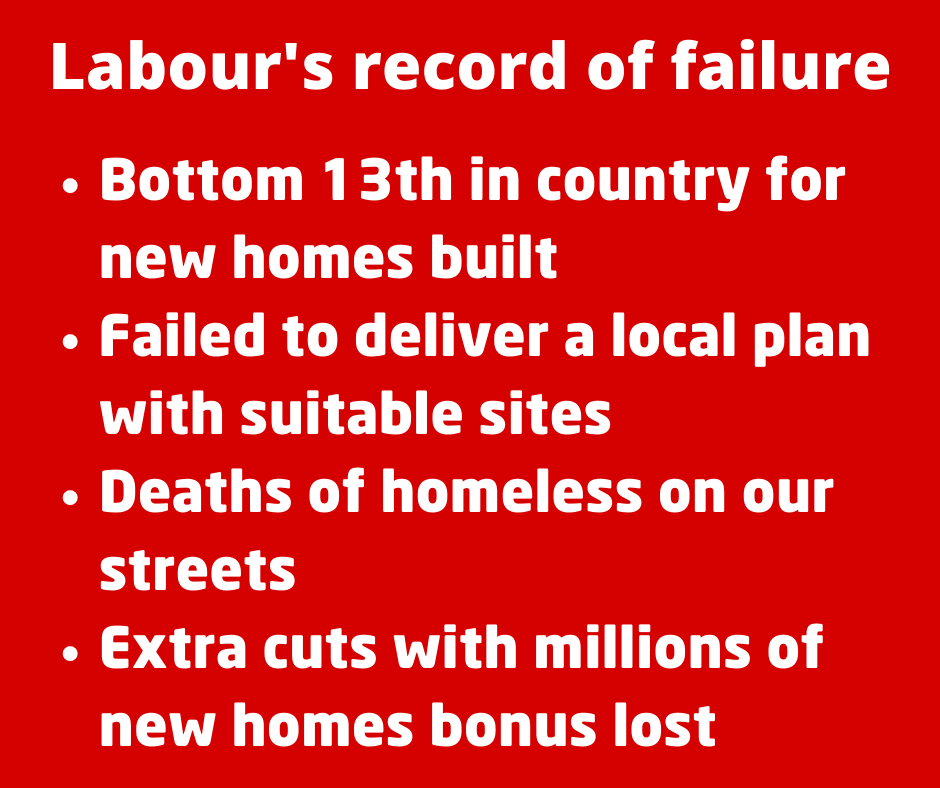 Calderdale Council has one of the worst records in the country for building new homes. As a result we have lost out in Millions of pounds of 'New Homes Bonus' funding. This funding could have prevented many of the public sector cuts that Labour promised to protect us from. In the past year just 61 affordable properties were built in the Borough. This ranks the Council as 'red' on it's own RAG rating system.

Even when you compare Calderdale to other Northern Mets that have faced similar challenging circumstances under a Conservative Government our current Labour administration has still failed us locally.

The lack of affordable housing is a real issue impacting on people. People are dying on our streets. Many more are stuck on the housing waiting list, unable to find suitable accommodation that meets their needs.

Don't just take our words for it, this is what one Labour Councillor had to say: “The council and partners are failing the people of Calderdale. Other areas are building far, far more houses,”

We demand better for the people of Calderdale

There are dozens of empty units on some of our high streets. Sadly, Calderdale as a local authority has sought to further expand the retails space in Halifax Town Centre causing an oversupply. At a time when the model of high streets as retail spaces is in decline. We would support the transition of our town centres into parks, leisure and residential spaces.

Bring empty homes back into use

There are too many empty homes in Calderdale. We would apply the maximum Council Tax premiums available on these empty homes to encourage landlords to bring them back into use.

There are many former industrial sites in Calderdale. This requires investment to get them into a suitable state for the sites to become profitable for developers. We would work via the West Yorkshire Combined Authority to unlock more of these sites and therefore reduce the amount of development required on the Greenbelt.

We would take a robust approach to challenging social housing providers over the state of repair of their properties.

We believe in fighting poverty. There is no greater poverty than the poverty caused by not having a home. That is why we would use the new Calderdale Housing Company to build more independent living and affordable housing. We would also develop and support Community Land Trusts to help bring forward more housing projects.