Labour's local election candidate for Ovenden has slammed the local paper for publishing the expenses of Halifax's MP.

These comments were then liked by the Labour Mayor of Calderdale, also an employee of the MP.

In online comments posted on Facebook Ms Durrans complained the newspaper story about Holly Lynch's expenses claim was "sensationalist". She went on to say the Halifax Courier should be ashamed for printing it as a story.

"Sean Bamforth Liberal Democrat candidate for Ovenden said: "Before MPs expenses were published there was widespread abuse of the system. We all remember the expenses scandal. It is right and proper that the local paper publishes these expenses. They should not be subject to political pressure from the Labour party for doing so.”

Councillor James Baker Leader of Calderdale Liberal Democrats said: "What's so strange is that there is nothing in Holly Lynch's expenses that we would object to. Her claims are legitimate costs involved in running an MPs office and employing staff.”
“However, we do feel strongly that the local paper shouldn’t be criticised for publishing them. It is worrying that Labour are attacking the press for doing this.” 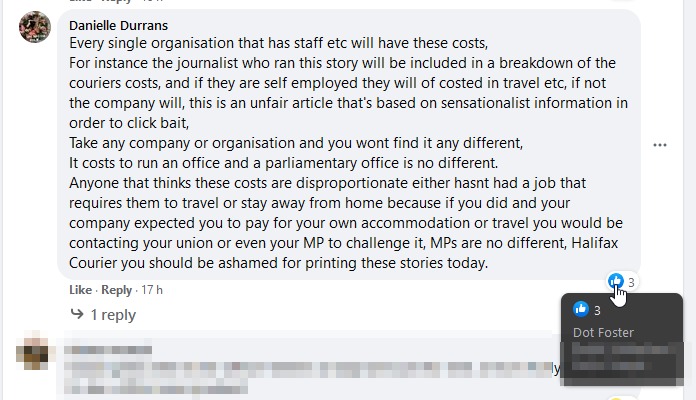